Generic term for a semantic symbol. Many possible interpretations exist in the context of encoding.

In computing, the most important aspect is that characters can be letters, spaces or control characters which represent the end of a file or can be used to trigger a sound.

One or more shapes that may be combined into a grapheme.

In Latin, a glyph often has 2 variants like ‘A’ and ‘a’ and Arabic often has four. This term is context dependent and different styles or formats can be considered different glyphs.

Most relevant in programming is that diacritic marks (e.g. accents like ` and ^) are also glyphs, which are sometimes represented with another at one point, like the à in ISO 8859-1 or as two separate glyphs, so an a and the combining ` (U+0300 and U+0061 combined as U+00E0).

A code point is an unsigned integer. The smallest code point is zero. Code points are usually written as hexadecimal, e.g. “0x20AC” (8,364 in decimal).

A character set, abbreviated charset, is a mapping between code points and characters. The mapping has a fixed size. For example, most 7 bits encodings have 128 entries, and most 8 bits encodings have 256 entries. The biggest charset is the Unicode Character Set 6.0 with 1,114,112 entries.

UCS-4 uses twice as much memory than UCS-2, but it supports all Unicode characters. UTF-16 is a compromise between UCS-2 and UCS-4: characters in the BMP range use one UTF-16 unit (16 bits), characters outside this range use two UTF-16 units (a surrogate pair, 32 bits). This advantage is also the main disadvantage of this kind of character string.

The Java language, the Qt library and Windows 2000 implement character strings with UTF-16. The C and Python languages use UTF-16 or UCS-4 depending on: the size of the wchar_t type (16 or 32 bits) for C, and the compilation mode (narrow or wide) for Python. Windows 95 uses UCS-2 strings.

The character range supported by a byte string depends on its encoding, because an encoding is associated with a charset. For example, an ASCII string can only store characters in the range U+0000—U+007F.

PHP5 only supports byte strings. In the C language, “strings” are usually byte strings which are implemented as the char* type (or const char*).

The char* type of the C language and the mojibake issue.

A UTF-8 string is a particular case, because UTF-8 is able to encode all Unicode characters [1] . But a UTF-8 string is not a Unicode string because the string unit is byte and not character: you can get an individual byte of a multibyte character.

An encoding describes how to encode code points to bytes and how to decode bytes to code points.

The 7 and 8 bits charsets have the simplest encoding: store a code point as a single byte. Since these charsets are also called encodings, it is easy to confuse them. The best example is the ISO-8859-1 encoding: all of the 256 possible bytes are considered as 8 bit code points (0 through 255) and are mapped to characters. For example, the character A (U+0041) has the code point 65 (0x41 in hexadecimal) and is stored as the byte 0x41.

By default, most libraries are strict: raise an error at the first unencodable character. Some libraries allow to choose how to handle them.

Most encodings are stateless, but some encoding requires a stateful encoder. For example, the UTF-16 encoding starts by generating a BOM, 0xFF 0xFE or 0xFE 0xFF depending on the endian.

Decode a byte string from an encoding to a character string. For example, decode 0x48 0xC3 0xA9 from UTF-8 gives “Hé”.

By default, most libraries raise an error if a byte sequence cannot be decoded. Some libraries allow to choose how to handle them.

Most encodings are stateless, but some encoding requires a stateful decoder. For example, the UTF-16 encoding decodes the two first bytes as a BOM to read the endian (use UTF-16-LE or UTF-16-BE).

When a byte strings is decoded from the wrong encoding, or when two byte strings encoded to different encodings are concatenated, a program will display mojibake. 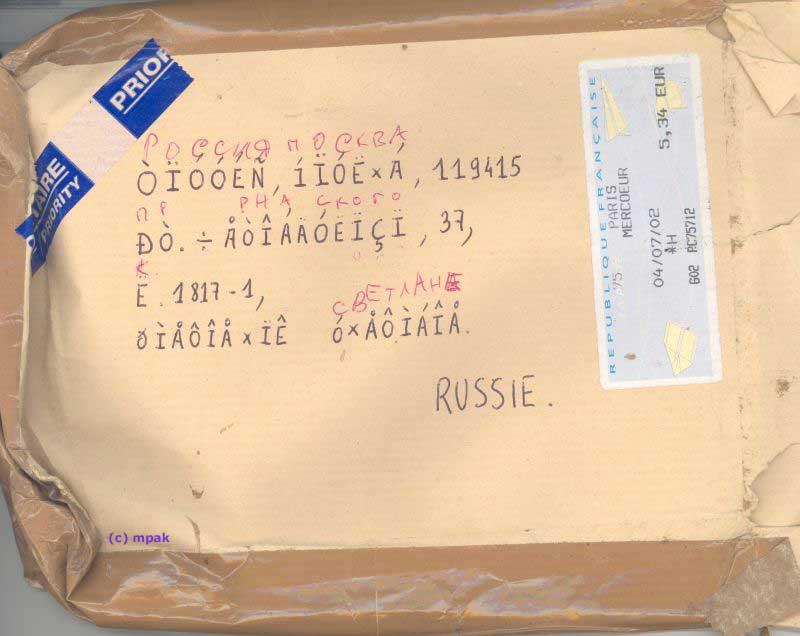 2004. An image of a post envelope with address written in krakozyabry (кракозя́бры) AKA Mojibake. The envelope contained a Harry Potter book. This letter was sent to a Russian student by her French friend, who manually wrote the address that she received by e-mail. Her e-mail client, unfortunately, was not set up correctly to display Cyrillic characters, so they were substituted with diacritic symbols from the Western charset (ISO-8859-1) The original message was in KOI8-R.

The address was deciphered by the postal employees and delivered successfully. Some of the correct characters (red) were written above the wrong ones (black).

How to guess the encoding of a document?